…On Being Enthusiastic, Passionate and Exciting Curiosity! 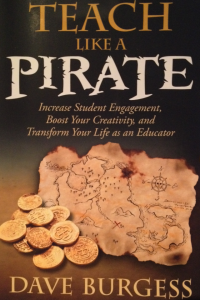 Earlier this year, when this Exciting Curiosity project had just begun, one of the first things I saw people talking about via Twitter was the book ’Teach Like A Pirate’ by Dave Burgess (@burgessdave). There was a lot of excitement around the book, and with a title like that who wouldn’t be curious about the content! So with a copy ordered for a pirate-loving friend, and a copy for me, I embarked on the adventure.

There is a story in Part 1 that really stuck out for me. The author, his family and their dogs were out and about when they came across a man who was also walking his dogs and they said hello. The man then spotted a hawk on the top of a nearby tree and told Dave all about the hawk, ‘the type of hawk it was, its hunting behaviour, and how its feathers were specially designed for the type of flight manoeuvres it needed.” (Teach Like A Pirate, p11) The discussion around the hawk and ecosystem of the surrounding area went on for around 30 minutes.

But why would a story like that stick out? Well … Read more...

Be More Dog! This video from O2’s recent advertising campaign sums up the whole of Exciting Curiosity’s philosophy in one minute…

…you can learn a lot from dogs, to them life is amazing. Balls are amazing. Sticks are amazing. Chasing your tail is amazing… Our world is full of great technology ready and waiting for us to enjoy.

I have had the pleasure of working with a number of educators over the past few weeks, opening up the wonders of creating books, movies and music on the iPad, teaching and learning with each other using techniques previously unimaginable, and showing the wonder of iCloud to gasps of excitement and general wonder! Helping educators to ‘be more dog’ is fun, enjoyable, always entertaining, but most of all a complete pleasure.… Read more...

A young girl I know has been working on chimney sums. (They are called chimney sums because the numbers are stacked vertically.) I was always curious about the strategies she was learning and how her mind was working. One day I offered her the iPad with the Explain Everything App open, explained that I didn’t really know what a chimney sum was and asked her to explain to me what she was doing as she worked it out. She was excited to teach me and got to work immediately.

Using Explain Everything she explained the chimney sum in great detail. She told me about each number, whether they were units, tens or hundreds, and how we were going to add them together. The result really made me smile. Not only was her explanation really clear, but  one particular bit of what she did really took me by surprise. She demonstrated a different way of working things out that I thought was really cool. You can see this bit in the video below…

It’s amazing to actually hear a thought process. I was able to experience a young learner’s mind actually thinking and working things out in real time. I love … Read more...

School is soon to start for another year, and one of the first activities I would often do with my new music classes is a piece called the ‘Doggy Walkin’ Blues’. It’s a fun 12 bar blues with a short, repetitive melody based on a pentatonic scale and once mastered (it takes about 30 seconds) leaves room for incredible improvisation by everyone involved. This structure provides a safe environment for kids just to let themselves go. A shared musical experience is a special thing – it brings people together in all sorts of ways. These experiences help to excite curiosity about music and sound in my learners and encourage confidence in their own abilities. Sometimes we are so into this piece that we keep it going for the whole class!

Which brings me to this inspiring video which I saw a while ago and pops into my head every now and then. It’s Bobby McFerrin at the World Science Festival in 2009 playing around with the audience and a pentatonic scale. What’s curious about it is how do we know what to do? How did we know what note that third … Read more...

Another run, another great episode of Jeremy Vine’s Being Human. This time solo percussionist Evelyn Glennie set out her thoughts on what it means to be human, and I was excited by her mention of curiosity:

Curiosity plays a large part in what defines us as human beings… This sense of curiosity is my main stay. I have found other ways to feel and sense sound using my body as a resonating chamber. I have achieved my hopes and dreams of becoming a musician due to my innate sense of curiosity. I’ve learned to hear by lip reading, and I’ve learned to use my body to feel sound, as if it were a giant ear.

It took a few hundred metres to get the image of running along the road dressed up as giant ear out of my mind, but how brilliant that Evelyn was curious enough to explore listening in other ways that we now can enjoy the amazing sounds she creates and performs to audiences all over the world, in whatever way we hear.

Whilst looking around Evelyn Glennie’s website I found her blog and a post entitled ‘Are you coming from the heart?‘ She … Read more...